Unidad documental simple 3 - Draft of a testimonial by A. S. Eddington for W. M. Smart 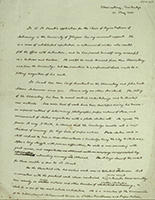 Draft of a testimonial by A. S. Eddington for W. M. Smart

Dr W. M. Smart’s application for the Chair of Regius Professor of Astronomy in the University of Glasgow has my warmest support. He is a man of established reputation in astronomical circles who would fill the office with distinction; and he has proved himself very successful as a lecturer and teacher. He would be much missed from this Observatory and from the University; but promotion to a professorial chair would be a fitting recognition of his work.

Dr Smart has been Chief Assistant in the Observatory and John Couch Adams Astronomer since 1921. There is only one other Assistant. The policy of the Observatory has been to avoid routine undertakings and to develop new methods. Two main lines of work have been developed during his tenure—an improved method of determining photographic proper motions of stars, and measurement of stellar magnitudes with a photo-electric cell. As regards the former it may, I think, be claimed that the Cambridge results set a new standard of accuracy for large series of proper motions. Photo-electric work is still confined to two or three observatories (Cambridge being the only British one). After a long struggle with pioneer difficulties the work is now proceeding with great success, and astonishing accuracy is obtained. A large share of the credit for these results is due to Dr Smart.

On the theoretical side his earlier work was in celestial mechanics. But in connection with the practical work above-mentioned his more recent interests have {1} been mainly in proper motions and other branches of stellar statistics, to which he is one of the most active contributors. He is a member of the Commission of the International Astronomical Union on Stellar Parallaxes and Proper Motions.

His teaching work covers elementary lectures on astronomy, advanced lectures on celestial mechanics and on stellar motions and a practical class at the observatory. Judging from the response of the students he is a stimulating lecturer. He normally supervises one or two research students.

An important part of his experience is his work as Secretary of the Royal Astronomical Society during the last five years. This brings him into touch with astronomers in all parts of the world, so that he is in full contact with all modern developments. It is perhaps not irrelevant to mention that he is Treasurer of the Royal Astronomical Society Dining Club—an office (of which the duties are by no means confined to the care of money) which is a tribute to his popularity with his colleagues.

To sum up:—He has shown himself able to make the most of the resources of a small observatory; he is well-known and esteemed internationally; he is successful with students; and is well used to administrative activity.

The various cancelled words and passages in this letter have not been recorded, except for the mistaken deletion noted below.

{1} Struck through by mistake.