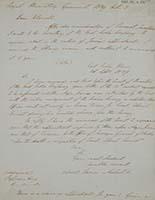 Royal Observatory Greenwich - In response to Colonel Everest's pamphlet, GA wrote to the East India Company to inquire into the nature of Major Jervis's appointment. They wrote back stating that it was for the entire management of the India Survey: 'There is a charming appointment for you! Given a furious fellow like Everest on one side, and a not-over-wise one like Jervis on the other, I do not think that a better appointment could have been devised for the purpose of setting them together by the ears and dragging some innocent persons into the quarrel'.