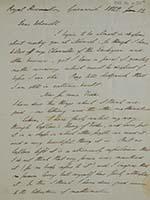 Royal Observatory Greenwich - GA has put [Pierre-Simon] Laplace's theory of tides 'in a shape in which other people can read it, and a very beautiful theory it is. But as Laplace left it is so atrociously repulsive that I do not think that any person ever mastered it (for no body refers to it) and I imagine that no person living but myself has fairly attempted it. In this I think I have done good service to the literature of mathematics'. GA gives a solution to the age of the tide: 'The time of high water is accelerated, but more for the moon than for the sun. Consequently (referring to solar time) the moon's high tide on any day, happening earlier than corresponds to the moon's position, does happen at s solar time corresponding to the day when the moon's transit was earlier - that is to a preceding day; the solar tide corresponds equally (in solar time) to all days; and therefore their combination corresponds to an earlier day. Thus we have age of the tide'. Can WW give any accounts on the height of waves, experiments on waves generally and a notion of the changes which WW's 'researches will make in your old cotidal lines?'