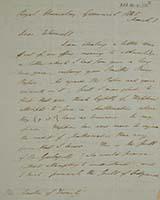 Royal Observatory Greenwich - GA acknowledges a letter WW recently sent concerning the Smith's Prize paper: 'As regards the paper and your comments on it, first I was glad to find that you think lightly of [William?] Hopkins's attempt to force in mathematics where [they?] have no business. In my opinion, Hopkins has done more to injure the credit of mathematics than any person that I know. This is the fault of the geologists (who would praise without attempting to understand), and I think, primarily the fault of Sedgwick.. In the next place , I was glad to see a question concerning the mathematical theory of waves. This is a subject which ought, I think, to be in some way brought into the curriculum of the university'. Although he has not yet settled the longitude of Valentia [see GA to WW, 2 Nov. 1844], 'I expect it will turn out an excellent work of its kind. We are much more puzzled in making the geodetic computations to compare with it (in large triangles upon a spheroid of assumed dimensions) than in the astronomical and chronometrical part: but after repeated trials I think we have managed to compute round the three sides of a triangle nearly or more than 100 miles each and to return within two or three feet to our starting point. This was to be the criterion of our method'. GA's paper on Irish tides is being printed. Similarly the printing of the Reduction of the Greenwich Planetary Observations 1750 to 1830 is finished. The reduction of the Greenwich Lunar Observations (1750 to 1830) is in the main finished: 'I am preparing to correct the elements of the Tables: and this I think upon the whole one of the greatest works that has ever been done in Astronomy'.