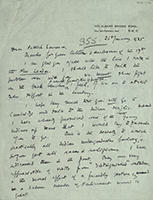 107 Albert Bridge Road, S.W.11.—Is glad Pethick-Lawrence agrees with the line he took in the New Leader and would like to discuss the problem with him. Encourages him to address the Indian Majlis at Cambridge. Explains why he joined the Inter-Parliamentary Union. Has been preparing evidence for the Debt and Taxation Committee on points not connected with the capital levy, but will give evidence on the levy later and hopes that Pethick-Lawrence will do the same