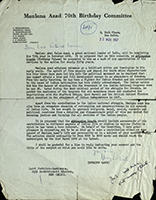 2 York Place, New Delhi.—Asks him to contribute an article to a volume to be presented to Maulana Azad on the occasion of his seventieth birthday.

Maulana Abul Kalam Azad, a great national leader of India, will be completing his 70th year in November 1958. It is proposed that on this occasion, an Abhinandan Granth (Birthday Volume) be presented to him as a mark of our appreciation of his services to the nation for nearly fifty years.

Maulana Azad attained eminence as a brilliant writer and theologian in his early youth. The spirit of free enquiry and search for truth which characterised him from those days soon led him into the political movement as he realised that man cannot attain a true and full development except in an atmosphere of freedom. From his early twenties, he has been a fighter for Indian freedom and his contribution to the cause of Indian nationalism has been widely acknowledged. The Indian nation did him the honour of electing him the President of the Indian National Congress when he was 35. Later during the most critical period of the struggle for freedom, he guided the destinies of the Congress for six momentous years and conducted the negotiations with Sir Stafford Cripps, Lord Wavell and the British Cabinet Mission which resulted in the attainment of Indian independence in 1947.

Apart from his contribution to the Indian national struggle, Maulana Azad has also been an outspoken champion of rationalism and progressiveness in all spheres of Indian life. He has sought to approach religious, moral, social, economic and political questions from a detailed and dispassionate point of view and worked for securing justice and fairplay for all sections of the Indian people.

It is proposed that the Abhinandan Granth should include assessments of his contribution to different aspects of Indian life or studies in various fields in which he has taken a keen interest. On behalf of the Committee, I have great pleasure in requesting you to be so kind as to make a contribution either on some aspect of Maulana Azad’s life and personality or in a subject of your special study. The articles should ordinarily be from 2000 to 3000 words and should reach the undersigned by the 31st March 1958 at the latest.

I shall be grateful for a line in reply indicating your consent and the title of the subject on which you would like to write.

Letter-head of the Maulana Azad 70th Birthday Committee. The letter is typed, except the opening and closing greetings, which are handwritten, and the date, which is stamped. Presumably the same message was sent to other potential contributors to the projected volume. At the foot has been added ‘Ld P will send a short message of tribute.’ (‘Ld P’ is a conjectural reading; what is written is indistinct.)

{1} These two words are indistinct.