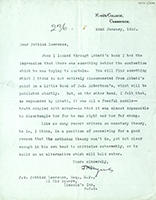 King’s College, Cambridge.—The contention in Abbati’s book (The Unclaimed Wealth; see 2/237) may have something behind it, but its exposition is muddled.

When I looked through Abbati’s book I had the impression that there was something behind the contention which he was trying to sustain. You will find something which I think is not entirely disconnected from Abbati’s point in a little book of D. H. Robertson’s, which will be published shortly. But, on the other hand, I felt that, as expounded by Abbati, it was all a fearful muddle—truth mingled with error—so that it was almost impossible to disentangle how far he was right and how far wrong.

Like so many recent writers on monetary theory, he is, I think, in a position of perceiving for a good reason that the orthodox theory won’t do, yet not clear enough in his head to criticise coherently, or to build up an alternative which will hold water.