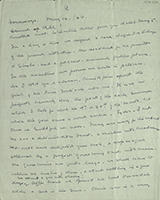 Another most interesting letter from you dated May 5 {1}. In a day or two we expect to hear definite tidings of the present situation—the deadlock for the present in Simla, and a forecast concerning future plans. In the meantime we possess our souls in patience. As I told you in advance, Christopher {2} spent the first of the May Festivals {3} with me. It was a perfectly heavenly day, the peak of the early summer which I look for about the 18th or 20th of the month, but which this year came a week earlier. Lydia & I met Chris at Guildford at noon. May was away for the weekend[.] We had a delicious little Feast, a chicken with breadsauce that would have delighted your taste, & asparagus followed by a perfect gooseberry tart with cream. The gooseberries are quite large—we shall have to relieve the bushes of them, & start bottling in a few days. We drank to you with sherry! After lunch we opened the West Verandah wide & sat in the sun. Chris was in a very happy mood, all smiles & laughter—very sunburnt & rejoicing in a lazy time. (He is working single handed on his Farm. Cannot get Labour, or accommodation for Labour.) But for a few hours he reverted to his real “Diogenes” self. I was that way myself when young—& knew what it was to desire nothing but sun & solitude! For that afternoon Chris was like the Baby in his Pram, that only wanted to be “a buttercup in Auntie Emmeline’s garden”[.] After tea we took him back to Guildford to catch an early train to Petersfield to feed his animals, and on the way home, we called to see the ecstatic little family of 3 Wilkinsons & one pretty little Nurse, & were in time to see the Infant in his Bath beholding all the wonders in company with his adoring parents! The Child is in splendid condition—sunbrowned all over & full of joy & vitality. He is much improved in looks. They have some really lovely photographs of him—one in particular, a perfect picture.

We came home for supper, & I fell into a very sentimental mood & should have written to you that evening but for the fact that I had sent you a long letter {4} by the mornings post.

But Sunday evening was the climax. On Monday the North East wind began to blow, & today the world Clad† in full summer vegetation strives under a blast that is far from kind.

Dorothy Plowman came to lunch today, on her way back from visiting her Mother at Worthing. She is full of life & interest & is preparing new volumes of Mark’s poetry & essays. She has a very keen publisher in Daker, & the Letters have been well received {5}. On June 6th I have been asked to speak about him with Middleton Murray† {6}. Dorothy was greatly interested to hear all about you & specially sent you her love. Piers is engaged in extremely interesting work, connected with Theatre. I have joined the Guildford Repertory Theatre Club & had taken tickets for a Shaw Matinée this afternoon, but of course I ’phoned the Director that I could not come (in case anyone else could use my tickets.)

I had a most interesting letter from Madeleine Doty this morning. She has actually pulled off her plan, & has 45 College Students for Geneva coming on Sept 1st. Will she I wonder get the L. N[.] Buildings & create an International University!! I shouldn’t wonder!

May 15—I received 2 letters from you this morning—May 8 & May 10 {7}—and am thrilled to know that we may have you with us again by May 26. Of course one cannot count on anything. I shall await with eagerness the promised announcement from the P. M. in the H. of C. tomorrow. All the snapshots in the Press are excellent. Joan Coxeter called to see me last evening, looking radiant & lovely. I read the descriptive parts of your letter {8} from Kashmir & Simla. She was thrilled & sent you her very special love. May arrived this morning after a week in London. She has at last had a surgical belt fitted, & is more comfortable than she has lately been. We all send our love. And this one sends her heart & all.

It strikes me that you will have to keep all my letters in a big envelope (as I keep yours) to read as light literature in the plane on the way home!

{2} Christopher Budgett, her nephew. His farm, mentioned later on, was Lords Farm, Sheet, near Petersfield.

{5} Andrew Dakers Ltd had issued Dorothy Plowman’s edition of her husband’s letters in 1944, under the title Bridge into the Future.

{6} Middleton Murry’s book Adam and Eve: An Essay towards a New and Better Society had been published by Andrew Dakers Ltd. in 1944.