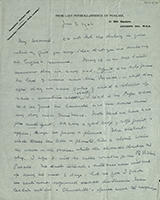 Do not let the delay in your return, give you any idea that you are missing the English summer. May 12 was the last summer day we have had. April was like June. The last 3 weeks have been March, & still, day after day we have gales of wind & storms of rain—sometimes sleet & hail. I read in the Paper today that in June the barometer has been lower than any day since Christmas. Not that we have had much frost. We have a good crop of soft fruit & apples, though no pears or plums. The violent wind tosses the trees & plants, like a storm tosses the waves on the ocean, while the clouds darken the sky. I hope it will be better weather for the Victory Parade {2}. No doubt interest & enthusiasm will work up during the next 5 days, but so far I find no sentiment expressed except disillusion. Even leading articles & Churchill’s speech have to recognize & attempt to deal with public apathy. Guildford & other towns too have refused to co-operate. The public feel that it is an exhibition of futility & waste. London has been much disfigured & spoilt for Londoners. It is not a happy time, & the real tragedy is brought home to people like G. G. {3} who could get no bread on Saturday, because she was too late in going out for it, & no milk because of the strike.

I have had a cable from Madeleine that she is scheduled to arrive in Southampton Dock next Wednesday, June 6th. She will take the train from Southampton to Woking, & on to Guildford where I shall meet her with the car. She has a transitional visa, & can only remain a short time. Probably she will stay at Fourways over Whit Monday, & we shall all go to London on June 11 & 12. I have avoided London for some weeks. There is much to do & see to here. I am giving much attention to the garden, and the little staff here needs a good deal of handling.

I have had very few official invitations during your absence[.] But I had one to meet F. M. Smuts {4}, and as I could not go, I wrote to salute him, and have had a charming personal reply in his own hand writing. I received a letter from Mrs Price Hughes yesterday, to tell me that she is constantly with us both in her thoughts. She is 93, & her writing is as good as ever. We had a very pleasant visit from Stuart & Ruth, though it rained hard all the time. There are 5 of your wild roses out today. I wish I could send you one. Farewell my darling. Keep well & serene, & enjoy the present moment. All here are well. May has arranged to spend a week with Dorothy to make room for Madeleine, should you have been able to get back. You remember we have booked rooms in Ventnor from June 24—July 8. May will stay with Tom & there will be a room for you at the week end or whenever you want it at my Guest House or at the Hotel near Trewartha. If the soft fruit ripens just then, Lydia will want to overlook the bottling, although she can show Violet & leave it to her after one or two experiments.

No food of any kind must be wasted.

And so again God be with thee.

{1} The address printed on the writing-paper is 11 Old Square, Lincoln’s Inn, W.C.2, but the letter was clearly written at Fourways.

{2} The national Victory Parade, to be held on 8 June.