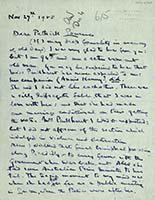 Longmeadow, Street, Somerset.—Discusses his feelings towards Christabel and Emmeline Pankhurst, and declines to contribute to the cost of a statue of the latter.

(If I may drop formality in memory of old days) I was very glad to hear from you: but I am 94 and am a rather worn-out old man. You may be surprised to hear that Miss Pankhurst has never appealed to me: her companion (Annie Kenny†.) did. She and I did not like each other. There was a silly Suffragette fable, that I was in love with her: and that she had made our marriage conditional on their getting the vote. Mrs Pankhurst I liked & respected; but I did not approve of the section which indulged in violence and destruction. Also I disliked that final triumphal procession along Picadilly† to curry favour with the Government when War broke out. Also she tied some Australian Prime Minister to her tail. The tragic moment to my mind was when she had got as far as a public meeting in London, when the Police were after her. She had managed to get there, and was just about to speak, when the Police broke in. “Women! They are taking me!” she cried. The women all jumped to their feet, but not (as she had hoped) to become violent. “You brutes!” was all they cried. Whereas she had wanted a real battle! And if a few women and police got killed,—all the better for the cause.

So that’s that! And you can leave me out of your subscribers for any additions to Mrs Pankhurst’s Statue in Westminster[.]

I wonder whether you know that I have become a member of “the Society of Friends” and as “a Quaker” am now a staunch Pacifist! Thus you & I have become far separated in our ideas; but not in our old friendship, I hope.

Ever yours very sincerely
Laurence Housman

PS. I’m afraid I have mislaid your present address, with the letter I received from you. LH