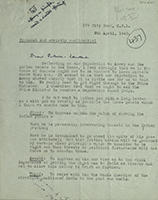 179 City Road, E.C.1.—Since the deputation to Amery was ineffective, a deputation should be sent to the Prime Minister (Churchill). Sets out the points to be made, drawing particular attention to the question of the strategic position of India after the war.

Reflecting on our deputation to Amery and the Indian debate in the House, I feel strongly that we in the House of Commons ought not to be content to leave matters where they are. It seemed to me that our deputation to Amery showed clearly that it is little use for us to talk to him. We really need to get right through to the Prime Minister. I therefore feel that we ought to ask the Prime Minister to receive a deputation about India.

I do not want to bother you with a long letter so I will put as briefly as possible the three points which I think we should make to him.

First: To impress on him the value of showing the Indian public—
that he is personally interesting himself in the Indian problem;
that he is determined to go ahead (in spite of his pre-war attitude); but that British action will be governed by certain clear principles which we consider to be right and that threats of political disturbance will not force us to abandon these.

Second: To impress on him our view as to the vital importance of getting the right man to India as Viceroy and not to allow this matter to drift on further.

Third: To raise with him the whole question of the strategic position of India in the post war world.

Whatever may be the political outcome one has to face the fact that India is not likely to attain great political stability in the early years of the new constitution. On the other hand India occupies a strategic position which represents one of the key points in the security structure of the world. It is a point which cannot be left open or as an invitation to new trouble-makers to step in. Presumably if, as contemplated in last year’s declaration, the British Government is to make a treaty with the new Indian Union, the provision of the necessary measures for the strategic security of the United Nations (naval bases, military garrisons, equipment for production of munitions, etc. etc.) will be one of the terms to be covered by the Treaty. I think we ought to ask whether these matters are receiving consideration (I have the case of the Irish ports very much in my mind) {1} and also particularly whether their significance is appreciated by the United States. United States opinion may criticise us for our handling of the Indian political situation because it is so easy to adopt high standards for other people’s problems; but, when it comes to strategic security, their interests will be identical with ours.

I will not develop this last point further. I am sure you will appreciate its significance. I touched upon it in my own speech in the India debate, but I did not want to say too much. It seems to me to have a vital bearing on the whole Indian Problem.

If you think there is any force in my line of argument perhaps we could have a few words about the matter in the House. I had already last week mentioned to Ammon my idea that some of us ought to try and see the Prime Minister. If you agree with this view it would then be a question of what sort of deputation should go, and this is also a matter on which I should like to have a few words with you.