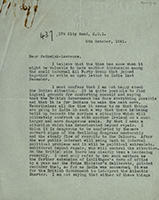 179 City Road, E.C.1.—Suggests holding another meeting of the informal all-party group that sent an open letter to India last December. Is concerned at the state of negotiations between the British Government and Indians.

I believe that the time has come when it might be valuable to have another discussion among the small informal All Party Group that joined together to write an open letter to India last December.

I must confess that I am not happy about the Indian situation. It is quite possible to find logical grounds for comforting oneself and saying that the British Government has done everything possible and that it is for Indians to make the next move. Nevertheless all the time it seems to me that things are going in India in such a way that there is being built up beneath the surface a situation which will ultimately confront us with another Ireland on a much larger and more dangerous scale. By that I mean a situation which has deteriorated beyond repair. I think it is dangerous to be comforted by the mere outward signs of the declining Congress membership and the steady flow of recruits to the Colours. After the war public interest will swing back to internal political problems and it will be political extremists, embittered beyond repair, who will control the situation. On the British side there has clearly been a hardening recently. I need only refer to two such matters as the further extension of Linlithgow’s term of office by a year and the Prime Minister’s deliberate, pointed reminder that, so far as India was concerned, it was for the British Government to interpret the Atlantic Charter. I am not saying that either of these things is right or wrong; but I do feel that they represent—as I have said—a hardening on the British side and have been interpreted with a good deal of misgiving, even among our friends in India. Sir Sikander Hyat Khan’s comment on the Prime Minister’s interpretation of the Atlantic Charter was significant.

Hopeless as the situation seems I feel that it is still up to all those who have the time to be interested in India to consider without resting whether there are any constructive steps that can be taken which might result in breaking the deadlock.

Can you let me know whether it would be possible for you to attend a meeting? It seems to me most likely that we should be able to get everybody together if the time could be fixed at 5 p.m. on some day when Parliament is sitting. Can you suggest a day to me when such a time would suit you?