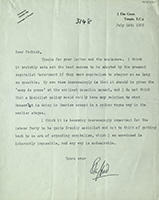 3 Elm Court, Temple, E.C.4.—The course recommended by Pethick-Lawrence (see 5/46) would be the best one for the present capitalist Government to adopt if they want capitalism to stagger on as long as possible. But it is increasingly important for the Labour Party to be frankly socialist and not to think of returning to an era of expanding capitalism.

Thanks for your letter and the enclosure {1}. I think it probably sets out the best course to be adopted by the present capitalist Government if they want capitalism to stagger on as long as possible. My own view increasingly is that it should be given the ‘coup de grace’ at the earliest possible moment, and I do not think that a Socialist policy would really have any relation to what Roosevelt is doing in America except in a rather vague way in the earlier stages.

I think it is becoming increasingly important for the Labour Party to be quite frankly socialist and not to think of getting back to an era of expanding capitalism, which I am convinced is inherently impossible, and any way is undesirable.

{1} Apparently a cutting referring to policies adopted by Roosevelt in America.