Item 262 - Script of a BBC radio talk on Rabindranath Tagore by Lord Pethick-Lawrence, broadcast on 12 Jan. 1961 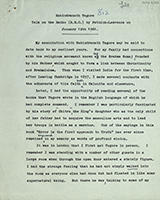 Script of a BBC radio talk on Rabindranath Tagore by Lord Pethick-Lawrence, broadcast on 12 Jan. 1961

Rabindranath Tagore
Talk on the Radio (B.B.C.) by Pethick-Lawrence on
January 12th 1961.

My association with Rabindranath Tagore may be said to date back to my earliest years. For my family had connections with the religious movement known as the Brahma Somaj founded by his Father, which sought to form a link between Christianity and Brahmanism. Thus when I visited India for the first time, after leaving Cambridge in 1897, I made several contacts with the adherents of this faith both in Calcutta and elsewhere. {1}

Later, I had the opportunity of reading several of the books that Tagore wrote in the English language of which he had complete command. I remember I was particularly fascinated by his story of “Chitra”, the King’s daughter who as the only child of her father had to acquire the masculine arts and to lead her troops in battle as a warrior. One of the sayings in this book “Error is the first approach to Truth” has ever since remained engraved in my memory, as words of profound wisdom.

It was in London that I first met Tagore in person. I remember I was standing with a number of other guests in a large room when through the open door entered a stately figure. I had the strange feeling that he had not simply walked into the room as everyone else had done but had floated in like some supernatural being. But there he was, talking to some of my fellow guests, in his melodious voice; and all the while his serene countenance seemed to bestow a benison on all who were present.

After I entered Parliament I went to India in 1926 on a political visit. {2} My wife Emmeline accompanied me. We felt greatly honoured when we received an invitation from the poet to stay with him at Santiniketan where he lived. I remember so well that beautiful Autumn evening when the sun was setting in the cloudless sky. We went first to see his famous library. It contained works in many of the languages of India. Some of them were so different from the books which I was accustomed to find in a library in my own country. While some were written from left to right as are all European languages, some were from right to left and others in Chinese characters from top to bottom. The latter were not bound up as pages in a volume, such as we use, but were tied together in strips with top and bottom covers of wood. I could of course only gaze at them from the outside as I have no knowledge of oriental languages.

Then we sat down to dinner with him. We talked of all sorts of subjects. He expressed himself strongly in support of the movements in India for self-government and regretted that so many of her young men were in detention or prison under the British rule. He wished to see a more liberal attitude adopted. We spoke too of the natural beauties of India and of her noble monuments. My wife expressed her deep admiration of the Taj Mahal, and Tagore intervened by saying that he had written a poem about it, but that it was in Bengali and had never been translated into English. “Oh do translate a sentence or two for me” pleaded my wife. So Tagore said to her “I say to Shah Jehan:—You knew that grief however poignant is mortal; so you had the conception of imprinting in marble a teardrop on the cheek of Eternity”.

And with that beautiful thought in our hearts we took leave of him next morning, and I never saw him again.