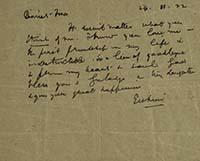 Robert Erskine Childers was born in 1870, the son of Robert Caesar Childers, a Pali scholar, and was educated at Haileybury and Trinity College, whence he graduated BA in 1893. From 1895 to 1910, with a period absent to serve in the South African War, he was a clerk in the House of Commons. During this time he made a number of voyages in sailboats, and in 1903 published 'The Riddle of the Sands', an espionage novel about German preparations to invade England.

In 1910, he resigned his position to pursue his Irish interests, having become convinced of the arguments for Home Rule, and was involved, briefly, in running guns to the Republicans. On the outbreak of the First World War, Childers was drafted into the Navy, owing much to his knowledge of the German Coast, and later into the Royal Naval Air Service as an intelligence officer. After the war he was decommissioned with the DSC and rank of Major.

In 1919 he moved to Dublin. He was one of the envoys sent by the Irish to the Versailles Conference and in 1921 was elected to the Dáil Éireann. He accompanied Éamon De Valera on the first delegation to London after the truce and was principal secretary to the delegation that negotiated the treaty with the English government in late 1921.

He was, however, unsatisfied with the outcome and when the Irish Free State was established, Childers joined the Republican army. On 10 November 1922 he was captured by Free State soldiers, court-martialled, and shot on 24 November.

A farewell letter written immediately before his death: 'Dearest Ivor, It doesn't matter what you think of me. I know you love me -- the first friendship in my life & indestructable. So in lieu of goodbye & from my heart & soul God bless you & Gwladys & her daughter & give you great happiness. Erskine'.

Accompanied by a letter from Ivor Lloyd-Jones to Norman de Bruyne dated 27 June 1935 donating this letter and [his copy of 'The Riddle of the Sands'] to Trinity College Library, Cambridge.